Check out Iron Man flying the unfriendly skies with a pair of F-22 Raptors! 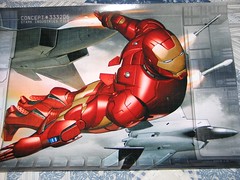 That’s way too cool. How awesome is this movie going to be? Robert Downey, Jr., as Tony Stark/Iron Man, Terrence Howard as Jim Rhodes and Jeff Bridges as Iron Monger, with Samuel L. Jackson and Hilary Swank as unspecified S.H.I.E.L.D. agents (though I bet/hope they’re playing Nick Fury and Black Widow).

Footage was shown at Comic-Con International this weekend, so expect a teaser trailer soon.

(You can read a description of the footage here.)

And finally, take a look at the updated official site!

Iron Man puts the pedal to his metal on his way to the theater near you on May 2, 2008!