This is your old pal John Bierly in the Pork Chop Express on a dark and stormy night when the thunder’s rollin’ and the lightning’s crashin’, and I’m talkin’ to whoever’s listenin’ out there. 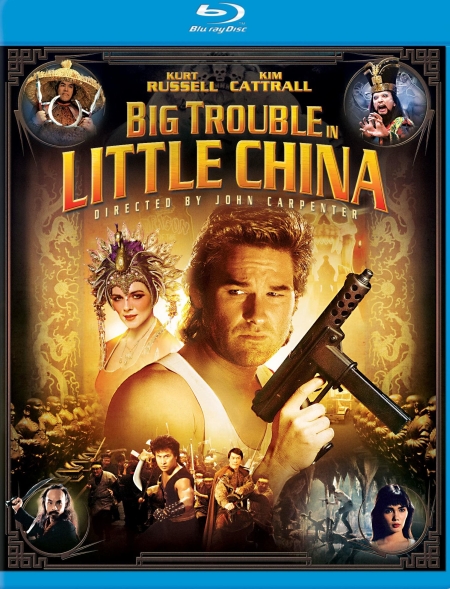 Now, I’m not sayin’ I’ve been everywhere and seen every DVD, but I do know it’s a pretty amazing planet we live on here, and a man would have to be some kind of fool to think there’s not a better home video format in this universe.

So when some wild-eyed, eight-foot-tall maniac grabs your DVD player, taps your years-out-of-print BIG TROUBLE IN LITTLE CHINA 2-disc Special Edition DVD (reviewed here) up against the wall, looks you crooked in the eye, and asks you if you have it in on Blu, you just stare that big sucker right back in the eye and remember what ol’ John Bierly always says at a time like that:

It’s hard to believe it’s been 23 years since tough-guy trucker Jack Burton (Kurt Russell) and his buddy Wang (Dennis Dun) followed the trail of Wang’s kidnapped gal-pal to Little China, where the Sing Dings — or was it the Chang Sings? — and the Wing Kongs got their little gang war interrupted by some “David Lo Pan” character, who came out of thin air in the middle of a goddamn alley while his buddies were flying around on wires cutting everybody to shreds, and he just stood there waiting for them to drive Jack’s truck through him with light coming out of his mouth.

(Tall guy. Weird clothes. First you see him, then you don’t.)

And then Jack and Wang got into bigger trouble, and Jack didn’t know where the hell they were a bunch of times, and he wondered where his truck was, and good ol’ Johnny Carpenter directed it all with charm and wit the old-fashioned way. Lots of monsters and top-notch chop-socky later and the day had been saved, just like in the old days. May the wings of liberty never lose a feather, I always say. Not to mention the fact that Suzee Pai and Kim Catrall were hotter than two-dollar pistols.

So is the Blu-ray the best this movie’s ever looked? I’d bet Egg Shen’s tour bus on it. A light layer of natural film grain brings out the finest details, and the colors look deeper and brighter than your favorite eyes have ever seen ’em. The 5.1 DTS-HD Master Audio track serves up 1:1 lossless sonic action so capably that it shakes the pillars of Heaven, Wang. And if that’s not enough for you, tune in to the (also lossless!) isolated musical score, where the drums are rumblin’ and the guitars are slashin’. Eight deleted scenes, an extended ending, three trailers, six TV spots, interviews, ancient makings-of, the theme song’s music video, and a crackerjack commentary by Russell and Carpenter are just some of the extra goodies here. They took what they wanted and left the rest — like your salad bar! — when it came to bringing over the extras from the 2001 2-disc DVD, but that thing’s out of print, and all the best stuff made it anyway.

So just remember what ol’ John Bierly does when the earth quakes and the poison arrows fall from the sky. John Bierly just looks that big ol’ storm right square in the eye, and he says, “Give me your best shot, pal. My BIG TROUBLE IN LITTLE CHINA Blu-ray and I can take it.”

That’s why I need you good people to sit tight, hold the fort, and keep the home fires burning. And if I’m not back in 100 minutes, call the President.