Lindy Hemming, an Oscar winner whose costume designs have appeared in the Harry Potter movies and every James Bond since GoldenEye, was brought in by director Christopher Nolan to create the new Batman costume that Christian Bale would wear in Batman Begins.

In keeping with the film’s theme, her inspiration was a prototype military suit that Bruce Wayne would alter and modify into his first Batman costume.

This morning, Lindy stopped by Entertainment Weekly to discuss the totally revamped Batman costume we’ll be seeing in next summer’s Begins sequel, The Dark Knight.

And she brought something with her: the first OFFICIAL photo of CHRISTIAN BALE in the brand new suit as BATMAN: 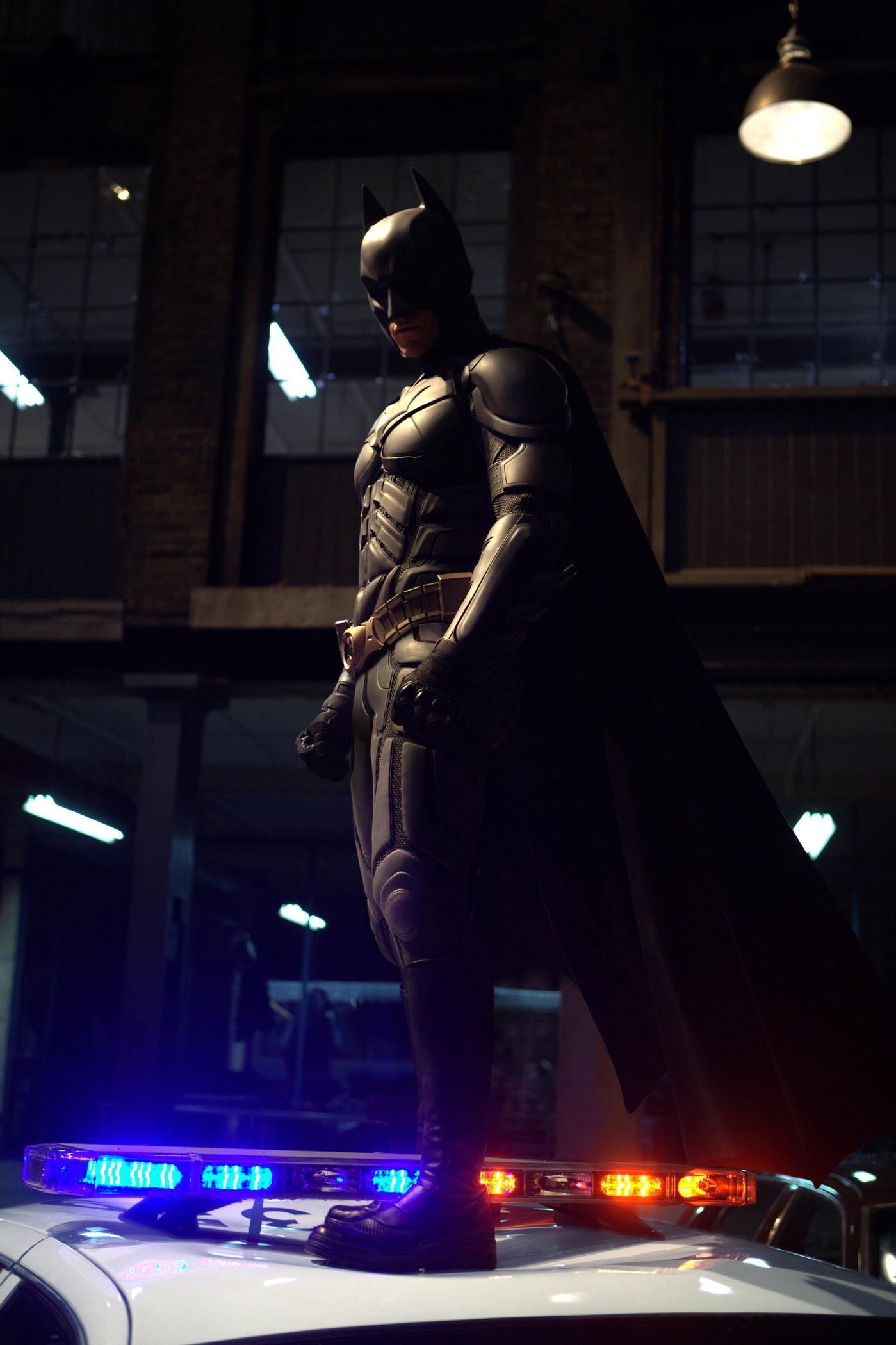 In the photo, Batman is standing atop a Gotham City police car.

And he looks AWESOME.

In the EW article, Lindy explains some of the changes. In all the previous Batman films, the mask and the neck have been one piece that made it difficult for the actors to move their heads naturally/normally. (Remember when Michael Keaton would try to look up at something, and he’d have to arch his entire back because the costume wouldn’t move with him?)

For the new costume, Lindy took the neck all the way up Christian Bale’s own neck. The mask section is a separate piece that fits over his head and lines up with the neck piece. So it’s two separate sections that look like one, allowing Bale to move his head easily and more freely.

The costume is both sleeker — and in some ways, busier — than the Begins suit. It reminds me in some ways of samurai armor, which struck a perfect balance between protection and mobility. It still looks like it would protect him from Gotham’s worst while a) allowing for more agility than the previous suit and b) showing off more of Bale’s natural physique. It’s functional and realistic while still retaining all the classic Batman elements.

And they kept the awesome utility belt from Begins!

I think it looks awesome. So now we’ve seen Batman and The Joker, played by Heath Ledger:

As always when big new Batman news is on the table, massive thanks go out to Bill “Jett” Ramey and his Batman on Film website. Jett had the Batman picture yesterday, but sat on it until today because he wanted to honor Entertainment Weekly’s scoop. Other sites ran a scan of the photo that someone with an early copy of the magazine sent in. And though Jett could have published it first, he stuck to his guns and didn’t steal Entertainment Weekly’s thunder. That takes honor and integrity and guts, and I’m happy to see that those things still exist on this big, crazy internet. Well played, sir. And nicely done.

And so it is, folks. Please stop by Entertainment Weekly’s website and read Lindy Hemming’s awesome comments about the new Batman suit or, better yet, pick up the issue that hits newsstands today for a closer look.

The Dark Knight and his rockin’ new costume will zip-line into the theater near you on July 18, 2008!