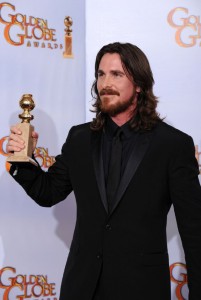 Yes! Congratulations to Christian Bale, who just won a Golden Globe for Best Supporting Actor for his hurricane-force performance in The Fighter.

He already won the Critics’ Choice Award. Next stop? Oscar.

Here’s hoping. Let’s just say that the wait for The Dark Knight Rises just got a lot more unbearable.

But before Bale suits up as Bruce Wayne and Batman one last time (unless Christopher Nolan comes up with an idea for a fourth Batman outing, which Bale says he’d be a part of in a heartbeat), he’ll be making a film in China that you can read about here.

Bale will play an American priest who attempts to help innocent Chinese citizens escape the horrors of the Nanjing Massacre committed by the Japanese army in 1937.