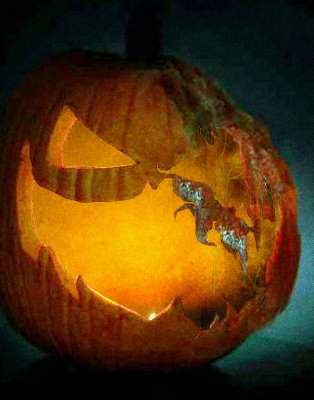 Halloween’s getting closer every day …

Here’s the further rotting as of Friday:

Happy Halloween from The Joker!

The Joker’s candle has almost melted!

Things over at The Joker’s Why So Serious? are taking an even darker turn toward the macabre as the jack o’lantern has begun rotting … on its left side.

So I wonder if the big reveal on Halloween — which seems the most likely day for a big reveal — will be a photo of Aaron Eckhart as District Attorney Harvey Dent after the unfortunate acid facial that turns him into one of Batman’s most classic (and tragic) villains?

… for Harvey Dent, but we haven’t seen Two Face yet.

Maybe we will soon.