Batman on Film reports today that director Christopher Nolan and producer Charles Roven have talked a bit about The Dark Knight, and you can read about it right here.

* As we already know, The Batman (Christian Bale) travels to Hong Kong. Producer Chuck Roven confirmed TDK‘s Asian trip, but would not reveal why Batman goes there. “Gangster hunting” was mentioned.

* The new Batman suit will be equipped with “lenses” — some sort of Bat-sonar equipment.

In case you haven’t seen the new Batman suit, click on the small version below to see a larger, high-resolution shot: 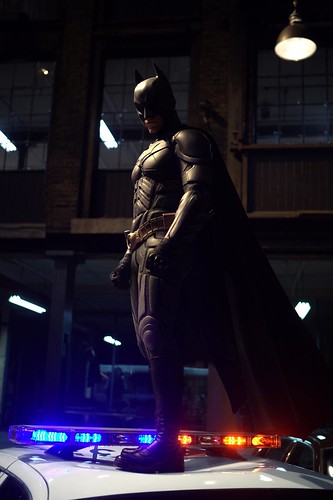 That’s going to be good news for lots of fans. Batman has always had white lenses in his mask in the comics, but there’s never been a practical way to do it in the movies. Which is actually good, because I think Batman is cooler and scarier when you can actually see the actor’s eyes. Based on the photo above, my guess is that the new suit will have retractable lenses. And that’s a very cool, best-of-both-worlds solution.

And then the following comments from Nolan are about the Joker prologue that’s going to be shown with IMAX presentations of Will Smith’s I Am Legend in December:

* That prologue that will be shown in IMAX in December is the first 5 minutes of the film.

* Here’s a translated quote from Chris Nolan: “[THE DARK KNIGHT] is not ‘The Joker Begins.‘ We did not want to tell how The Joker became what he is. In those five minutes [of the prologue], we show how The Joker goes from being a small-time crook to Gotham‘s greatest villain. It‘s like ‘The Rise of the Joker.’”

This is also very good news. When you think of the previous Batman movies, the villains were always more important than Batman. Batman Begins changed that by showing us the heart of Bruce Wayne without taking anything away from the seriousness of his mission. By getting The Joker’s introduction out of the way in the prologue, it will leave the rest of the film to focus on Batman’s reaction to The Joker instead of making Christian Bale play second fiddle to what’s sure to be a terrifyingly awesome performance from Heath Ledger.

I also like the fact that we’re not going to get a detailed Joker origin. Have you seen Hannibal Rising? It was terrible. What’s scarier? A Hannibal Lecter who does what he does because of emotional/psychological tragedies from his past, or an elegant, educated, charming gentleman who wakes up one morning and decides he likes to eat people? I find the latter infinitely more terrifying, because sometimes evil just happens. And it sounds like that’s the kind of thing we’re going to get with The Joker.

Expect to meet Heath Ledger’s Joker on an IMAX screen near you on December 14, and then prepare yourself for the main event on July 18, 2008.