One of my favorite perks of being born in 1975 is that I was just old enough — or more accurately, just young enough — to experience Christopher Reeve’s Superman movies as they happened. My parents had already taken me to see Star Wars at the Georgetown Drive-In by the time I saw the first one, so my little imagination was already overflowing with spaceships and heroes from galaxies long ago and far away. 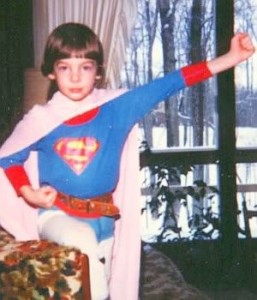 But Superman was different. Yes, he was just as alien as Chewbacca. But he was our alien. He lived with us on Earth, right here, right now, and he could fly.

And as majestic and as powerful as his abilities made him, his heart and humanity shined through it all like a beacon even brighter than the big red “S” on his chest.

He wasn’t just our hero and guardian. He was our friend.

And now he’s about to fly again.

I know that isn’t news around here — I’ve talked a lot about the new movie being produced by Christopher Nolan (Batman Begins, The Dark Knight, The Dark Knight Rises) and directed by Zack Snyder (300, Watchmen, Sucker Punch), and I’ve offered a few of my own casting suggestions and reported on other Superman bits and pieces that you can browse through here.

But now, things are about to get real.

Deadline says Nolan and Snyder have officially begun searching for their Man of Steel. The age range reportedly being considered is 28-32, but when Deadline names names, it’s seemingly a list built more from conjecture than actual reporting. (Lois Lane would be ashamed.)

Joe Manganiello, a lifelong comic book fan and a 33-year-old, 6’5″ mountain of sleek, solid muscle, has long been campaigning for the role. He played bully Flash Thompson in Sam Raimi’s Spider-Man movies and can currently be seen as werewolf Alcide Herveaux on HBO’s True Blood. He says he’s been talking to Warner Bros. about being their new Clark Kent, and if cast I have no doubt that he’d give it every bit of his effort and then some, but I just don’t see him as Superman. Height and muscles are not everything. He might look great wearing the red, yellow and blue in a still photograph, but I’ve seen nothing in his acting or demeanor to suggest the power and majesty and goodness that say “Superman.” Even more than that, I can’t begin to even remotely imagine him as Clark Kent. He seems like a nice guy, but … eh.

Deadline also mentions Armie Hammer, whom I’ve written about previously. Hammer also has size on his side, along with a voice I can really hear coming out of Superman. He looks a lot more like a Captain America to me than a Man of Steel, but I like the guy’s demeanor in interviews, and he has the spark that I just don’t see in Manganiello.

I’m not sure how Ian Somerhalder (The Vampire Diaries) made it on Deadline’s list; his inclusion seems nothing more than the authors’ suggestion. He’s got a good look for Superman, and he was on Smallville for a while a few seasons ago, but why the hell would you cast someone who’s been on Smallville who isn’t Tom Welling?

I watched this season’s episodes of Smallville again with a friend the other night, and it’s becoming increasingly difficult for me to see beyond Tom Welling and Erica Durance as Clark and Lois because they really are that good. I do realize and understand that Nolan and Snyder are going for a new direction with their Superman movie. That’s entirely fine and massively exciting, because we’ll get something new while Smallville will always still exist as its own amazing thing.

And I get it that casting Welling would be regarded (however unfairly) as Smallville: The Movie rather than as a true Superman film. But Welling has played the character longer than anyone else. And while I’ve always enjoyed him as Clark, his acting has been on an entirely different level this season as the writers continue to release the chains they’ve regrettably kept around the character in previous seasons. Welling has really taken to this year’s stronger material, giving us an iconic Clark with the best Lois Lane ever by his side. (Seriously, by my estimation, Erica Durance is winning about seven Emmys per episode this season.)

I know I’ll never get my Tom Welling Superman movie, but my point here is that I hope Nolan and Snyder look at what Smallville is doing right this season and realize their Clark and Lois need to be at least as good as Welling and Durance if not better.

I look at a list that includes names like Manganiello and Somerhalder and I don’t see guys who’d make a better Superman than Welling. They’re not even in the same orbit. Season Ten has offered some amazing little Superman movies so far, along with the definitive portrayal of the Clark/Lois romance. Anything less than that just isn’t going to cut it.

Smallville musings aside, my number one choice for a new cinematic Superman has long been Jon Hamm, best known for his role as Don Draper on AMC’s Emmy juggernaut Mad Men. Hamm is a classic, ruggedly handsome man’s man with great presence and strength. But he’s also hilarious, making a spectacular fool of himself in several episodes of 30 Rock and in three Saturday Night Live hosting gigs so far. He’d nail the affable charm of Clark Kent and the staggering power of Superman in ways that would take the character to his highest heights ever.

I’ve had my fingers crossed ever since Think McFly Think reported that Hamm was under consideration. But alas, his age (39) seemingly knocks him out of the bracket reportedly being looked at. And that’s a shame. Because, as I’ve said before, I don’t want to see any angst or uncertainty in this movie. If I want to watch a young Clark learning the ropes and trying to figure out his place in the world, I’ve got ten seasons of Smallville for that.

In the end it doesn’t matter what I think, and it never did. I do trust Nolan and Snyder to find the right man for the job. I just hope they cast someone who embodies everything that makes the character so special. We’re bound to hear all kinds of names being tossed around in the coming weeks as the casting process swings into action; some of them will be good, some will leave me terrified, and some of them we’ll never even hear. After all, Ryan Reynolds seemed to come out of nowhere and nab Green Lantern at the absolute last second, just as Andrew Garfield was cast as Spider-Man despite barely if ever being mentioned by the press.

(I’m also going to go out on a limb here and say that I really think Jake Gyllenhaal could do something interesting with it. And we know that Nolan and writer David Goyer like him; he was almost Batman in Batman Begins before the role went to Christian Bale.)

I know I take these things too seriously, but Superman (who’s been around since 1938) is just as much a piece of American mythology as any other classic hero of literature. He remains popular for a reason. The movie needs to show us why he’s necessary and relevant because he knows what to do and not because he’s still trying to figure out what it all means.

The talent behind the camera is everything we could possibly ask for. But what’s really going to sell this movie is the man in front of it.

It may not seem that important in the grand scheme of things, but it’s important to me.

Make me believe a man can fly again.