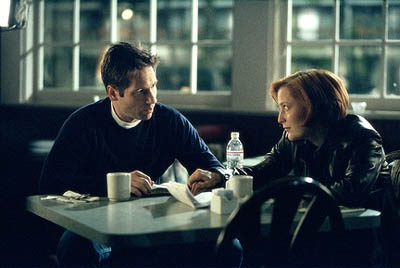 So says David Duchovny in this recent interview:

Looking at at your work on The X-Files, it ran for a very long time, are there still things that you would like to see Mulder do? Is that maybe why you’re interested in doing another X-Files movie?

David Duchovny: Well, I had always kind of wanted to segue the television show into a movie franchise. I never really wanted the show to die or to quit it. I got tired of the grind of making a network television show but I never tired of the character or the possibilities of the show. I would love it if we were able to expand it into a movie franchise because I love playing the character and I love the show.

Can you talk at all about The X-Files 2? Maybe where that’s at or what people might expect from that?

David Duchovny: It’s at… the script is written and as far as I know we’re all trying to shoot in December at some point. We would all love it if we could keep it a secret and just give everybody a fresh experience of not knowing what the movie’s about. I know if I was a fan of the show I would kind of be excited to be surprised.

I got to interview David Duchovny myself a few years ago, and he’s one of the nicest, funniest and smartest people I’ve ever talked to. You can read it here.

And I hope there’s another Scully hair scene like the one she had in the first X-Files movie when she runs out of the bee-filled silo and her hair’s all messed up and it’s the sexiest thing ever.