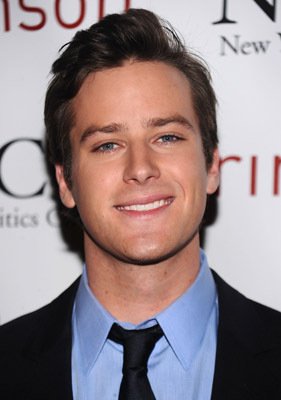 One of my all-time favorite writers and people, the beautiful and outrageously talented Mallory from Serial Drama, sent me a link tonight that I’d like to share with you for about a thousand different reasons.

It’s an interview Vulture did with actor Armie Hammer, who’s currently gaining massively deserved critical acclaim for playing not just one but both of the Winklevoss twins in The Social Network.

As many of you know, Hammer was cast as Batman a few years ago in Mad Max director George Miller’s Justice League movie for Warner Bros., which ended up getting canceled during pre-production but got as far as the actors being fitted for costumes and trained in all kinds of awesome combat arts.

With Hammer’s star on the rise, he’s naturally been mentioned as a potential candidate for Superman. I’ve got a lot to say about that in a minute, but first let’s listen to what he had to say about being cast as Batman. It’s a long stretch of interview but well worth your time to read:

There have been a lot of Batman costumes, from the outlandish Joel Schumacher costumes to the more grounded battle armor of Christopher Nolan’s films. What kind of take did George Miller have in mind?
It was very, very character-specific. It did have a semblance of a battle-armor feel, but at the same time, because it was so character-specific, it was all made out of the finest materials. Because Batman has such incredible resources, his utility belt was made from the finest Italian leather and highly polished, and the things that would come out of his forearm, they were titanium but wrapped in very fine leather. I mean, it was all really well-done, very utilitarian. This was before Christopher Nolan’s The Dark Knight had come out, and this was going to be the first movie where Batman would be able to turn his head [in the cowl]. We had the first bat-suit that let the head turn, it just never got the chance to make it onto the screen.

I’m still surprised that it didn’t happen. I know there were budget issues and the WGA strike sapped the movie’s momentum, but Miller had it so planned out that it’s hard to believe he simply walked away from it. And now he seems to be running into problems with his Mad Max reboot.
I know, the poor guy. He’s such a genius, too! It’s a shame. The thing with Justice League is that he created an entire universe, and everything was done. They had pre-vizzed a lot of the special-effects sequences, and we saw some of the fight sequences without even having filmed them yet. There was a giant room that he had turned into the storyboard room — this huge conference room that had floor-to-ceiling storyboards on the walls — and you’d start at one point and just walk around the entire room and by the time you were done, it was frame-for-frame the entire movie. We saw it on paper and we were going to bring it to life, we just never got the chance.

So now what happens to that stuff? It just gets locked in a box and put in the Warner Bros. basement, Raiders of the Lost Ark–style?
Yeah, I guess so. One of the most crippling things that happened to us financially was that the Australian government denied us a 40 percent tax rebate that we were supposed to get. We had a crew entirely comprised of Australians, the director was Australian, most of the producers were down there in Australia … it was Australian through and through, but they felt we hadn’t hired enough Australian actors. And of the main cast, three or four of them were Australian and there’s only, like, seven [main characters], so I don’t know how many they wanted. But they denied us that 40 percent tax credit and with a budget that size, 40 percent is something you just can’t leave on the table.

Oh, wow.
Yeah, so it was even more bad-ass. [Laughs.] I was learning insertion techniques, gun handling … all the stuff that Batman has to know because he doesn’t have superpowers. He’s human, so he has to be the consummate fighter but he also has to have a detective’s mind, so we would spend a lot of time cultivating that. You’d be handling situations and finding people’s weaknesses and exploiting them. It was very Machiavellian, in a way.

While I don’t know why they were doing gun training for Batman, it really doesn’t matter, because it’s amazing to read Hammer’s enthusiastic descriptions of the costume and the work that had been done on the film before it got canned. I’ve no doubt he’d have done the role great justice. (Pun noted, but not intended.)

So, back to that Superman thing. Hammer stands 6’5″, radiates kindness and charm, and possesses a wonderfully deep and commanding voice. If I were a 5-year-old kid, and I saw someone like Hammer as Superman, he’d be my hero for life. (And the same goes for Batman, though I wouldn’t trade my main man Christian Bale for anything.)

When Vulture asked Hammer about the rumors he’s being considered for Superman, he said this:

You’ve made a lot of people’s Superman fantasy-casting lists. Did you have your people put in a call to Zack Snyder, who’s directing the reboot?
[Laughs.] You know what’s funny? I did talk to my people recently about that for the first time, and I think they’re going a little older with Superman. I hear they’re going 35, 40.

Really? Wow, Jon Hamm will be excited.
Yeah, I don’t know what that might mean.

This tells us several things about the Superman movie. For one thing, it brings the already fishy “Clark Kent is a journalist traveling the world trying to decide if he should, in fact, even become Superman” plot summary even further into question and doubt. And, as both Vulture’s interviewer and our girl Mallory pointed out, if they’re going for someone as old as 40, it certainly does bode well for all the wishlists (including mine) that have 39-year-old Jon Hamm’s name at the top.

But let’s just say that Armie Hammer does end up getting cast as Superman. I wouldn’t have a problem with that at all.

As usual, it’s up, up and we wait. In the meantime, thanks so much to Field Agent Mallory for pointing this out and making my day in all kinds of ways.