The bad news is that we’ve got to wait until October 18 to get the new Garrison Starr album, The Girl That Killed September. 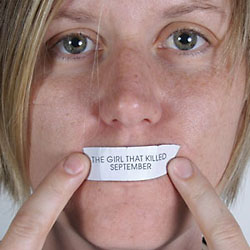 The good news is that we can pre-order the album right here, right now.

I first heard Garrison’s music when my friends Bob and Courtney bought her amazing (and now criminally out of print) Songs from Take-off to Landing album after seeing her open for Cracker at a concert I wasn’t able to go to.

I missed her yet again when she did an in-store at a local record store in 2004 while I was in New York seeing Jonatha Brooke (whose new Careful What You Wish For is another album you probably don’t have and most certainly should), but I sent money with Bob and Courtney and had them buy me copies of Songs from Take-off to Landing and her new album at the time, Airstreams & Satellites, which is also massively spectacular.

Garrison put out one of my favorite albums of 2006 — The Sound of You & Me. Perhaps you’ve heard the song “Beautiful in Los Angeles,” featuring killer harmonies by Toad the Wet Sprocket singer (and solo artist) Glen Phillips.

If you haven’t, you need to remedy that right away.

It’s on there along with lots of excellent others, like “Let Me In” and “No Man’s Land.”

Over the last couple of years I’ve been lucky enough to see lots of Garrison’s live shows. Sometimes she’s rocking out with a full band, and sometimes it’s just Garrison and her guitar. Either way, what gets you is her voice. It can be yearning and scolding and vulnerable and feisty and everything else under the sun, sometimes all within the same song.

The girl can do no wrong.

So check out the official The Girl That Killed September page right here at Media Creature Music, and be sure to check out her MySpace page for tour dates and other info.

And don’t forget to pre-order the new album.

If you’re not convinced, just listen to the song clips.

It’s going to be a long wait until October 18.