Though the trailer has now disappeared from The Joker’s website, it’s still available to be seen right here from the good people over at Yahoo! Movies. So be sure to check that out if you haven’t been able to see it yet; there’s no footage, but the dialogue will kick your ass and The Joker’s laugh — courtesy of Mr. Heath Ledger — will give you nightmares.

You can also check out my original post about the scavenger hunt to see a new photo of The Joker and Rachel Dawes, played by the infinitely lovely and cosmically talented Maggie Gyllenhaal.

There’s been a lot of new news over the past few days about the movie.

Superhero Hype ran this article on Tuesday about the new Batman theme that composer Hans Zimmer is writing for The Dark Knight. Zimmer and James Newton Howard — who’s also returning for the sequel — worked together on Batman Begins, and the music in that movie was awesome. In the article, Zimmer explains that in the first film he didn’t feel Batman had earned a theme yet, and that his ideas for the theme will be completed for — and heard in — The Dark Knight.

Also on the drawing board is an an animated, anime-style anthology that’s set to hit DVD shortly before the The Dark Knight hits theaters on July 18, 2008. The stories will fill in gaps between Batman Begins and The Dark Knight and will feature a variety of writers.

The good folks over at Newsarama — which is the most thoughtful and intelligent comic book news site on the planet — posted this awesome preview of the Batman prequel anime.

There will be six stories in all, with each one written by a different writer. Writers confirmed by the Warner Bros. memo that Newsarama cited for their story include Josh Olson (who wrote the ugly, hilariously awful screenplay for the big-screen adaptation of A History of Violence), comic book writer Brian Azzarello (whose work is very hit-or-miss for me) and David S. Goyer, who wrote the Blade movies and co-wrote Batman Begins with its director, Christopher Nolan.

(Goyer also crafted the story for The Dark Knight with Nolan, who’s writing the screenplay for that one with his brother, Jonathan.)

Here’s an early glimpse at the art from the project: 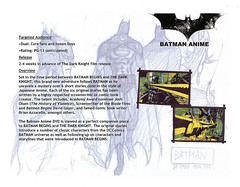 And please be sure to check out the Newsarama article, which also features information about an animated Wonder Woman movie that sounds equally awesome.

The September 2007 issue of Empire has an excellent interview with Batman himself — Christian Bale — about his past, present and future films. 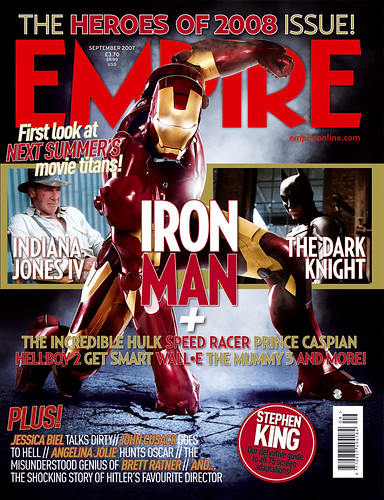 … and you should really check it out. (If you can’t find it at your local bookstore, you can buy a copy from Empire’s website.)

In the interview, Bale talks about the martial arts training he’s doing for The Dark Knight:

“We’ve got a bit further with Keysi, the martial art we learned for the first one. I’m actually learning how to do it more realistically than ever before, though it’s such an extremely violent way of fighting; there are literally moves where you tear someone’s cheek away from their face, or rip their nose off — every part of you becomes a weapon. It’s formidable. Batman doesn’t kill, so we can’t have him doing that: we modify it.”

And that right there is the definition of Batman’s martial arts. Bruce Wayne learned all kinds of styles and forms during his years traveling the world, and he’s taken bits and pieces from all of them to create his own unique style. That’s what makes him such a powerful — and unpredictable — martial artist. You never know what he’s going to throw at you next.

And now, some rumors:

Bill “Jett” Ramey — the deservedly well-respected commander-in-chief of Batman movie news and fan motivation on the web and beyond — posted some solid intelligence on his Batman on Film site this week about upcoming Dark Knight marketing.

Jett’s source says we can expect another Joker website — bearing new photos from the movie — in September, and that the first theatrical trailer will appear online on (or perhaps even slightly before) December 14. And we’ll probably have to go through another series of online challenges, like this one and this one and this one, before we actually get to see it.

And now we know what The Joker’s cryptic “See you in December” message/warning means, given that we’ll undoubtedly see Heath Ledger’s Joker in all of his sick, twisted, terrifyingly awesome glory in the December 14 trailer (which will almost certainly be attached to the Will Smith action movie I Am Legend that opens the same day).

And finally, my friend Greg sent me some awesome photos of Gotham City police cars that he took in his hometown of Chicago, where The Dark Knight is currently filming. I’ll get those up later today!