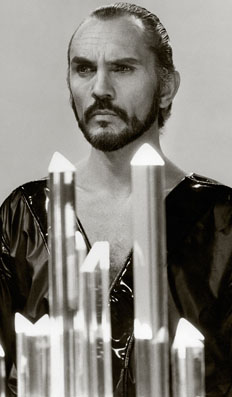 With the news still hot off the presses that Zack Snyder is directing the new Christopher Nolan-produced Superman movie we’ll be getting in 2012, speculation will be running wild about everything from story and casting to who the villains might be.

Seemingly as an aside, General Zod’s name was dropped by The Hollywood Reporter yesterday. The tidbit was quickly confirmed by /Film and Latino Review.

Zod, a Kryptonian war criminal, first appeared in Adventure Comics #283 in April 1961 but didn’t gain much notoriety until Terence Stamp magnificently portrayed him with cool, calculated cruelty in the first two Christopher Reeve Superman movies. (He’s barely in the first one but has a massive presence in the second.)

For a film designed to reinvigorate the Man of Steel, Zod seems somewhat of an unlikely choice for the primary bad guy. First of all, he’s already been done — and well — in Superman II. Not to mention the fact that he’s gotten a lot of use in recent years, figuring prominently in the Last Son and lengthy World of New Krypton storylines in the comics and across the entire ninth season of Smallville, where Callum Blue played a clone of Zod who was never really struggling to contain his inner depravity as vigorously as he’d like you to believe. Blue was fantastic, and his battles with Tom Welling’s Clark Kent in the season finale rate among the show’s most awesome moments of all time.

Does that mean Zod is too played out? I don’t think so. Especially when it comes to the general public that doesn’t read comics, doesn’t watch Smallville, and can’t remember who fought Superman in a movie 30 years ago.

Zod also creates opportunities for some excellent character drama. I keep thinking about the role Ra’s Al Ghul played in Batman Begins. He represented something that Bruce Wayne could have become, but didn’t.

You could do the same with Superman. Zod and Superman have the same powers. But Zod seeks to use those abilities to enslave us, while Superman fights to protect and inspire us. Why does Superman make that choice? Why does he offer us hope and light, when he could so easily choose the path of darkness and tyranny?

You also get an opponent who can match Superman punch for punch, which creates huge opportunities for some really massive and inventive action.

On the other hand, Zod could be a red herring and we could end up with another villain entirely. Nolan’s been known to pull a fast one from time to time.

Either way, we should start hearing more news soon!