Mark Ruffalo says he’ll be playing both Bruce Banner and the Hulk in The Avengers in this recent interview with Vulture:

In the two Incredible Hulk movies of the past decade, stars Edward Norton and Eric Bana played Bruce Banner but let the effects crew worry about the big green guy. In Marvel’s upcoming The Avengers, though, Mark Ruffalo will actually play the Hulk: “I’m really excited. No one’s ever played the Hulk exactly, they’ve always done CGI,” he told us at last night’s Launch of Farmhearts at Pure Yoga. “They’re going to do the Avatar stop-action, stop-motion capture. So I’ll actually play the Hulk. That’ll be fun.” But he’s nearly as excited about playing Banner: “I really love the first TV version of it, the Bill Bixby one,” Ruffalo told us. “I’m gonna shoot for that a little bit. He was an everyman in it. He’s always on the run and trying to find love. It’s really a sympathetic character, before he turns into the Hulk and fucks everything up.” Also, if you needed one more reason to be excited for Avengers, Ruffalo tells he’ll be playing history’s first-ever 3-D Hulk: “I hope I don’t bulge in anyone’s face, that’s all I have to say.”

I certainly like hearing he’s dedicated and especially love the praise he gives to Bill Bixby.

Edward Norton (and Tim Roth, as the Abomination) performed motion capture for 2008’s The Incredible Hulk, and director Ang Lee did the same for his Hulk in 2003.

And as for no one ever actually playing the Hulk before? 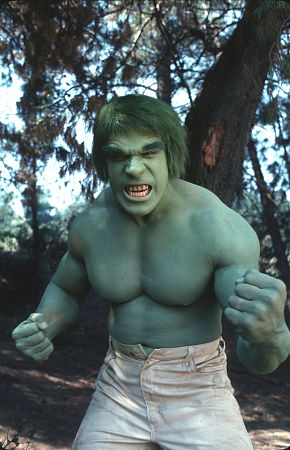 But that’s okay. Like I said, if they were going to replace Norton, I’m glad they found an actor of Ruffalo’s caliber.

(You’ve got to admit, I’m trying really hard to let all of this go.)