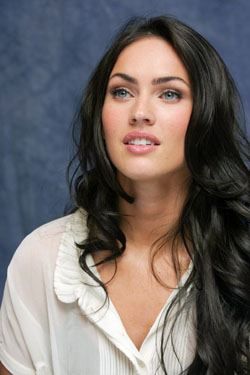 While I’ve been on vacation from computing, lots of things have happened that I’ve wanted to talk about here.

This is one of them.

Back in May, Megan Fox was possibly fired from — or possibly resigned from — Transformers 3.

An avalanche of he said-she said followed; some sources accused director Michael Bay of treating Fox poorly, while others blamed Fox herself for a comment comparing Bay to Hitler — a comment that was taken out of context and rarely reprinted in its full form.

(You can read a lot of that stuff here and here.)

(And by comparison, Fox’s co-star Shia LaBeouf got away with some harsh words about Steven Spielberg and his own complaints about the diminishing quality of the Transformers franchise.)

One of my favorite scenes from the first movie is the one where Sam (Shia LaBeouf) implores his teacher for an “A” because his dad promised to buy him a car. “Let me tell you about a dream,” Sam says. “A boy’s dream, and a man’s promise to that boy.”

This situation makes me feel like that boy, and Michael Bay is the man who promised to tell me a story. One of the most pivotal and Spielberg-esque moments in that entire film comes a bit later, when Sam asks Fox’s character, Mikaela, to get inside Bumblebee with him.

“Fifty years from now, when you’re looking back at your life, don’t you want to be able to say you had the guts to get in the car?”

What will this do to the story of the third movie? What plausible explanation can they possibly create to explain away Mikaela’s absence? Did she get killed off-screen by Decepticon assassins? Did she leave Sam for another guy? No matter what they do, it’s going to cheapen Megan’s contributions to the previous movies.

And then they’ll have to waste time introducing her replacement, a lingerie model named Rosie Huntington-Whiteley. (Maybe she’s got legitimate chops, but what happened to hiring actresses? Perhaps this says more about Bay’s casting intentions than he’d like to admit.) While I don’t believe it’s been confirmed, the IMDb says she’s playing Carly, who was Sam’s girlfriend in the original cartoons.

Okay. Fine. Whatever. Why are we introducing Sam to his cartoon soulmate in the final act of the trilogy? And why are you slowing down my giant robot movie with more human drama?

And I feel bad for Megan Fox. The press turned her into a sex symbol, and then the press decided it was tired of the constant exposure that the press itself created. Fox never asked for any of it, and she really seems to take it all in stride. Good for her.

As for Transformers 3, it debuts July 1, 2011 at a theater near you — without one of its best original elements.