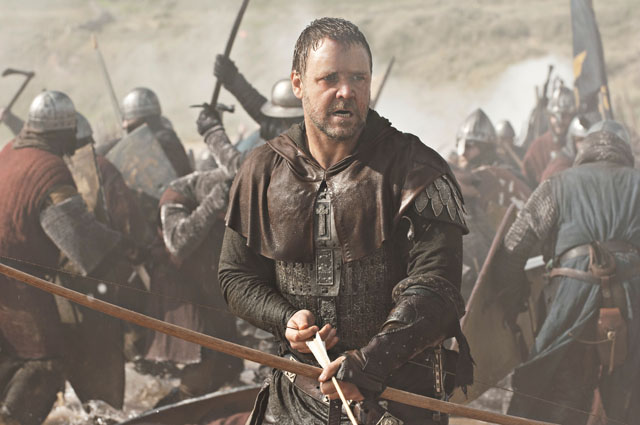 For all the movies and television series that have been made about Robin Hood, and as much as I love anything involving bows and arrows and swords and heroics, I’ve really not seen that many of them. But I absolutely love Kevin Costner’s Robin Hood: Prince of Thieves, which was directed by Kevin Reynolds, who made another of my favorites, The Count of Monte Cristo.

What wasn’t to love? You had Alan Rickman and Michael Wincott in the rogues gallery and, as my friend Rhiannon eloquently (and correctly) stated, “Any movie that has Morgan Freeman flinging a scimitar at a witch is a winner.” Couldn’t have said it better myself.

While Costner’s take was more of a fun adventure, the new version by director Ridley Scott — starring Russell Crowe as the legendary hero — goes for more of an historical angle. And though there are points in its hefty running time where it can’t quite decide whether to be a sweeping historical epic or a smaller, nobler harbinger of the events that defined a nation and created an outlaw, I really can’t name a single scene or performance that didn’t work for me, and I can’t wait to revisit it on Blu.

King Richard the Lionheart (Danny Huston) has fallen in battle, and Sir Robert Loxley (Douglas Hodge) is charged with returning the crown to England with the news. But Loxley and his men are brutally murdered in an ambush set by Sir Godfrey (Mark Strong), whose French lineage means his allegiances aren’t entirely to his own countrymen.

Interrupting the slaughter — and also interrupting the fleeing Godfrey’s face with an arrow that needed to go just a little to the right — is Robin Longstride (Crowe), an archer who, along with comrades Alan A’Dale (Alan Doyle), Will Scarlet (Scott Grimes), and Little John (Kevin Durand), had to sit out the battle at the mercy of the King’s probation.

Robin promises the dying Loxley that he’ll finish his mission for him. But Loxley gives him yet another task — returning the sword of his father, Sir Walter Loxley (Max Von Sydow), to his family home, where the woman who’s now his widow, the Lady Marian (Cate Blanchett), still waits for her husband’s return.

Robin and his merry men decide the easiest way to do this and then quickly disappear from history would be to don the armor of the fallen men, and so they do, with Robin impersonating Loxley. The news is delivered. Next, the sword. But nothing else that happens is remotely that easy.

The elder Sir Loxley — with an infectious glimmer in Von Sydow’s eye despite the character’s blindness — is far from offended by Robin’s impersonation of his son. In fact, he’s thrilled by it, and wishes Robin to continue the charade. Lady Marian obliges her father-in-law despite being initially disgusted by the idea, but of course she warms to Robin as the story goes on.

And I love the chemistry between Crowe and Blanchett. Robin has never known how to be anything but a warrior, and Marian never got the chance to learn how to be a wife. So even though neither of them is a spring chicken, romance is still something relatively new to them — and more than a little terrifying. It’s one of my favorite aspects of the film, and I almost wish it had been given a little more time.

But we’ve also got to make room for the new King John (Oscar Isaac), crowned in the wake of his brother’s death despite the legitimate misgivings of his mother, the formidable Eleanor of Aquitaine (Eileen Atkins). And his choice of queen, Isabella of Angoulême (Léa Seydoux, whose succulent lines reminded me of a dirty French Scarlett Johansson), doesn’t do Eleanor’s peace of mind any favors, either. (Also look out for a French lieutenant played by Denis Menochet, who played Seydoux’s father, Perrier La Padite, in one of last year’s most amazing performances in Inglorious Basterds.)

When the new king sends his lapdog Godfrey to collect taxes from the beleaguered citizens as the French plot a siege against England’s southern coast, the barons look for a leader and a hero.

Throw in some Magna Carta intrigue and a wild, appropriately outrageous beachfront battle at the end, and you’ve got a big, exceedingly well-made film that looks fantastic and entertains with plenty of style. 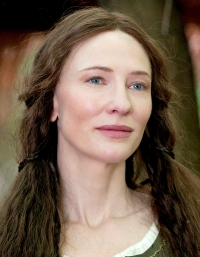 Russell Crowe is really fantastic here, inspiring during big speeches and suitably reserved when quiet moments demand it. Between this and the excellent Master and Commander: The Far Side of the World, the Australian actor is doing England proud.

The movie also did nothing to abate the deep and mighty love I hold in my heart for Cate Blanchett, whose otherworldly beauty shines through Marian, no matter how plain they try to make her look.

William Hurt is also amazing as William Marshal, the 1st Earl of Pembroke, who served four kings and earned a reputation as the greatest knight who ever lived. Hurt’s performance will make you believe it, and he shares one of the film’s best and tensest scenes in a hallway with Strong.

If you’re looking for a Robin Hood movie where Robin and his Merry Men run around the woods and interfere with the best laid plains of the Sheriff of Nottingham, you won’t find it here. And I like that, because we’ve all seen that story. Robin Hood aims the arrows of its narrative at a more historical context while capably holding true to the heart of the legend we all recognize and love.