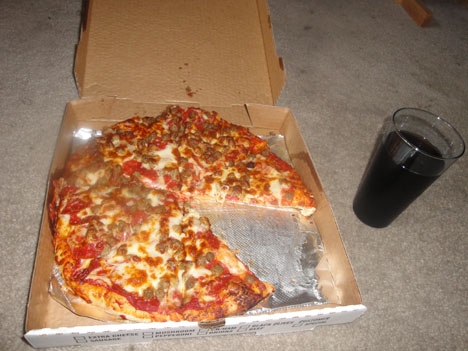 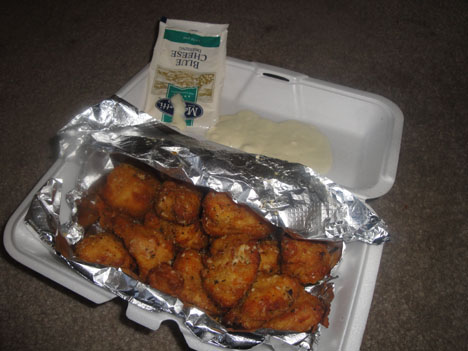 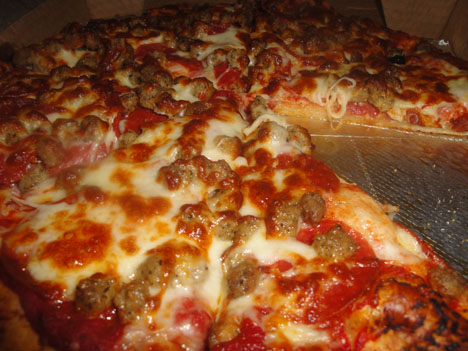 Many weeks ago, when most of the rest of the River City was at Thunder Over Louisville, my friend Melissa and I decided to try Danny Mac’s Pizza, at 1014 Clarks Lane off of Poplar Level Road. Primarily built for carryout, it only has two tables inside, and that’s where we ate. She got a massive calzone, and I got the Philly cheese steak, which was huge. A very generous helping of juicy, delicious shaved steak, big mushrooms, green peppers and onions, and gooey, melty mozzarella and provolone. I also got a side of boneless garlic/Parmesan wings. We loved everything we ate, and I couldn’t wait to eat there again.

So today, as I planned to watch the last two episodes ever of the foolishly canceled Pushing Daisies on Blu-Ray, I ordered a pizza with sausage and pepperoni and another side of those amazing garlic/Parmesan wings (which, without the bones, are really just big chunks of chicken, which is entirely fine by me).

Not only is Danny Mac’s sauce delicious, but the crust on the hand-tossed pie I got was of a really good thickness. The best part, by far, was the toppings, not just in quality but in quantity. Tons of cheese, a massive population of pepperoni, and enough sausage to send a pig farm into 47 kinds of panic.

And I can’t stress how huge the boneless wings are. Only $5.99 for 12, and they put the measly wings at any of the franchise chains to shame in both value and price. The sprinkles of Parmesan really accentuate the garlic flavor well. And like I said, they’re just really huge chunks. An order of these would easily be a meal all its own, unlike the franchise chains which barely give you enough to qualify as a snack.

I planned to eat the leftovers for a couple of days but didn’t really factor in just how filling the meal would be — after five boneless wings and just three pieces of pizza, I’m so stuffed I can barely type. Can’t wait to eat the rest.

So if you live in Louisville and love pizza and want to try a really killer value, call Danny Mac’s with great confidence. You’ll be glad you did.