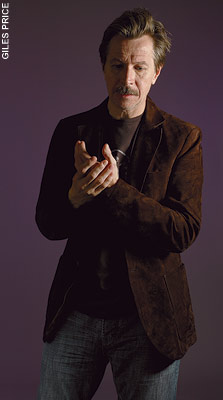 Gary Oldman, whose performance as Sgt. Jim Gordon in Batman Begins was one of my favorites from that film, recently spoke to Telegraph in the UK about his life and career.

Click on the photo of Oldman rockin’ the Gordon mustache to read the article.

Oldman says, “The character closest to me is Jim Gordon,” adding, “Got a good sense of right and wrong. Family man. Just a regular geezer.”

A regular geezer who, at the end of Batman Begins, was entrusted with the Batmobile by Batman and helped the Dark Knight stop Ra’s Al Ghul’s plan to force Gotham City to tear itself apart.

(One of my favorite shots in the whole film is when Batman is gliding away from having just escaped the train, and Gordon, having just done his part in the Batmobile, stands up and waves at Batman. I like how they portray Gordon as kind of a sweet nerd with a good heart full of hope in a city that can’t remember what that word even means.)

Gordon was promoted to lieutenant for his actions. “You really started something,” he tells Batman at the end, before they discuss how much work still needs to be done to bring Gotham back. Most chilling is Gordon’s warning to Batman about escalation. If Batman is wearing a mask and jumping off rooftops, what are the freaks and criminals — particularly those who’ve now escaped from Arkham Asylum, including The Scarecrow — going to start doing to raise their game against Batman?

Gordon then warns Batman about a new criminal on the scene, who shares Batman’s taste for the theatrical. Gordon flips over a joker card, Batman says he’ll look into it, and that brings us to the sequel, The Dark Knight, which is out on July 18, 2008.

I also like Oldman’s quote in the article about how he doesn’t have a publicist and doesn’t go to parties or premieres. “I just have dinner at home every night with my kids.”

Don’t forget to catch Gary this July 11 as Sirius Black in Harry Potter and the Order of the Phoenix, which looks 47 kinds of awesome.