(The quotes in this article were taken from the film’s official press notes.) 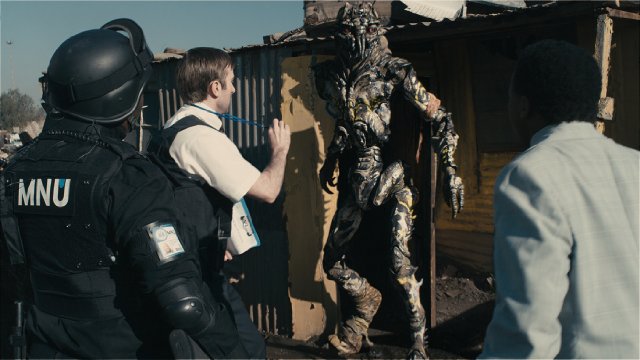 Once upon a time, a giant flying saucer with all the texture and grace of a primitive steel factory came to Earth. Just as surprising as its arrival was its location — it didn’t stop above any of the usual suspects like Manhattan, or Washington, D.C., or Chicago. It came to rest in the skies directly over Johannesburg in South Africa — and it just sat there.

No heat rays. No invading alien armies. No agenda. The whole world waited with baited breath for a first contact that never came, so we flew up there and cut our way inside to find a dying hive of insect-like creatures whose appearance earned them the derogatory nickname “Prawns.”

Not content to let them live (or die) on their ship, we dragged them down and gave them a home called District 9 while all the world’s nations tried to figure out what to do for them — or with them.

As those first few months became 20 years, the fenced-in District 9 devolved into a dirty, dangerous, militarized slum. Multi-Nation United (MNU) was formed to manage the Prawns, though their interests were focused far more sharply on harnessing the Prawns’ alien weaponry for human use than on anything remotely resembling maintenance of the creatures’ well-being. But even those attempts hit dead ends when we figured out that their biological firing mechanisms could only be triggered by their specific alien DNA.

So what now? Do we kill them, or just keep moving all 1.8 million of them around? The film begins as a documentary about the Prawns’ arrival and history as it chronicles MNU’s plan to move the Prawns “happily and safely” to an “Alien Relocation Camp” 200 kilometers outside of Johannesburg. The brochure makes it look quite inviting. The real thing looks like a concentration camp.

Complicating matters are the Nigerian gangsters who’ve flocked to District 9 under the guise of “trading” with the Prawns. They hoard the Prawns’ prized commodity — cat food — while stockpiling weapons both human and alien. But their true intentions run deeper and darker than commerce — their leader follows a superstitious and ritualistic belief that if he eats enough aliens, he’ll absorb enough of their DNA to be able to use their guns.

Good-hearted but inexperienced MNU official Wikus van der Merwe (Sharlto Copley) is placed in charge of evicting the Prawns from their current shacks in District 9 while convincing them that their new “homes” will be equivalent to a deeee-luxe apartment in the sky. Wikus must also cope with the cruelty of Koobus (David James), MNU’s chief of military operations.

“Wikus is Afrikaaner, which is perceived by some in South Africa as a kind of a redneck,” James explains. “I decided that I would play Koobus as English, a man who has spent his military service out of country. Even at the outset, in every way, he sees himself as being superior to Wikus.”

As you can imagine, it all goes very badly. “A small amount of power goes a long way with Wikus,” says Copley, a filmmaker himself who’s a lifelong friend and collaborator of District 9 director Neill Blomkamp. “He’s an ordinary guy who likes to wield power in a bureaucratic way. That’s why MNU promotes him — they want a guy who will do things in an orderly, proper way.”

Copley’s work in such scenes is masterful, with both humor and tension rising from Wikus’s sincere but constantly foiled attempts to get the Prawns to listen to (and obey) the rules and regulations of the human world. Its even more impressive when you consider that Copley wasn’t a professional actor. His performance, therefore, comes across as entirely instinctual rather than in anyway way rehearsed or informed, and the movie is so, so much better because of that.

“Neill has found a very soulful way of approaching science fiction,” Copley continues. “The genre can be clinical, even cold and unemotional. But in Neill’s hands, it resonates quite deeply. There’s no particular message or big moral of the story — it’s just a melting pot of emotions that comes out.”

Other things come out quite literally, but the less you know about this film going in into it, the better. To its credit and benefit, DISTRICT 9 isn’t quite the film its trailer makes it out to be. There’s something deeper going on here that asks bigger questions. What happens to a man who’s not seeking a holy grail but unwittingly becomes it himself?  How much humanity can you lose and still be considered human? Such morality certainly comes into question, but never at the expense of gripping character drama and gritty action sequences that gain momentum and brutality from the realism with which they’re staged and shot.

What could have been a jarring mix of visual and narrative formats plays seamlessly. “Essentially, the film bounces from our story, which is obviously fictional, to a sort of ultra‐real mode,” Blomkamp says. “It’s all part of the same story; the movie fluctuates between something that feels like a film and something that feels bizarrely real.”

Adding to that feeling is the astonishing near-perfection of the visual effects, which rarely look anything less than utterly photo-realistic. Actor Jason Cope talks about helping bring the Prawns — including the elder member of a pivotal father-son Prawn duo — to life: “I play about ten different characters. It was quite a thing to wake up and say, ‘Which creature will I be today?’ My mom was very excited when I got the part. She asked, ‘What are you doing?’ I said, ‘I’m playing a community of intergalactic beings in the townships.’ She couldn’t quite get her head around it.”

Luckily, she didn’t have to. “Neill had a very clear idea about what he wanted from the non-humans,” Cope continues. “During the rehearsal process, we got a feel for what he liked, but he also gave me a lot of freedom, within certain boundaries. I wouldn’t act too much like an animal or an insect, but I’m definitely not acting human, either.”

Copely certainly approved of his co-star’s methods. “Jason is a terrific actor to play off of. Those were some of the best scenes in the film for me.”

On-Set Effects Supervisor Joe Dunckley describes the Prawns as having “an insect exo-skeleton crossed with that of a crustacean. They have sinewy, delicate joints between the hard shell areas, similar to a crab or crawfish. They’re meant to be entirely disgusting. They secrete some sort of resin, so we used various forms of goo to give them that high shine and life‐like appearance.”

WETA Workshop provided the drawing boards, and where there’s a WETA, there’s a Peter Jackson. The man who successfully brought The Lord of the Rings trilogy to the big screen is both a friend and a mentor to Blomkamp and serves as a producer on the film — which wasn’t always what it turned out to be. “We were considering a production of HALO, based on the video game,” Jackson says. “That movie never happened, but we loved working with Neill so much that when he pitched us DISTRICT 9, we decided it would be fun to turn his idea into a feature film.”

For a fraction of the cost, DISTRICT 9 looks better and most certainly plays better than its last-summer rivals like TRANSFORMERS: REVENGE OF THE FALLEN and G.I. JOE: THE RISE OF COBRA. Its story and its presentation are as wholly original as its scares and thrills are exciting and unpredictable. This is an audience-pleasing thrill-ride you’ll still be discussing and debating with your friends for hours after it’s finished.