Fourteen years in the past of an alternate future’s present, scientist Lionel Canter (James Cromwell) invented a new technology that would eventually allow people with disabilities to “project” themselves into society via artificial “Surrogates” — perfect android creations that could be controlled by their operators from their homes and function in the world at large just as a healthy human being could. (Not surprisingly, military applications followed quickly.)

But seven years later, Canter’s original idea had become something else entirely. A whopping 98% of the world’s citizens were now conducting their daily lives via Surrogates, causing massive reductions in crime, disease, and discrimination.

It is really that difficult to imagine? Think about how many hours a week we spend behind our computer screens, typing to friends on Facebook rather than chatting on the telephone (or better yet, in person). Think about all the video games and online communities that allow people to hide behind avatars from the comforts of their own homes. Think, too, of our reliance on technology. Even with all the strains on economies worldwide, people still find ways to pay for all the expensive bells and whistles on their cell phones every month. Imagine what we’d do if we were told the technology existed to allow us to do whatever we wanted while looking however we wanted to look.

Back to this future’s present, not everyone believes in the utility of Surrogates. Some, such as those who lock themselves away in reservations that are little more than glorified slums devoid of any technology, are more radical in their hatred of what they see as inhuman monstrosities than others. Their champion is “The Prophet” (Ving Rhames), whose fingers reach deeply into the issues concerning society’s literal new workings.

Boston-based FBI agents Tom Greer (Bruce Willis) and Jennifer Peters (Radha Mitchell of PITCH BLACK and SILENT HILL) uncover something dark and troubling when they investigate the destruction of Canter’s son’s Surrogate outside of a night club. Under normal circumstances, the Surrogate’s termination wouldn’t affect its at-home operator in the least. But the mysterious weapon used to fry this Surrogate also liquefied its operator’s brain in his skull, a fact that Tom’s superiors don’t want going public for fear of causing a panic. 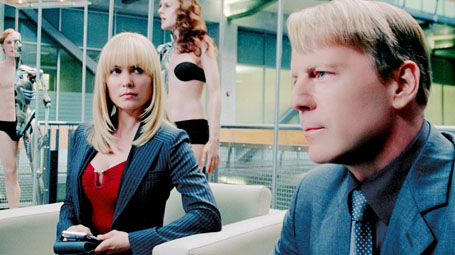 More troubling is the fact that Canter’s son was using one of Canter’s Surrogates, suggesting that the original target had been Canter after all. But there’s more. Who stands to gain the most from making people afraid of using their Surrogates? And is Canter, fired from and publicly humiliated by the very company he helped create, a suspect himself?

As Tom and Peters will soon discover the hard way, time is running out in more ways than one — and the weapon’s masters have even bigger ideas. Matters are complicated further when Tom’s Surrogate is destroyed, and he has to continue the investigation in his own skin. He’s not been out of his house in years, and neither has his wife, Maggie (Rosamund Pike, from DIE ANOTHER DAY and AN EDUCATION). Since the death of their only son in a car accident, they can only bear to look at each other via their Surrogates — something that Tom has been fighting desperately to change.

Surrogates was directed by Jonathan Mostow, whose genre credits include BREAKDOWN, U-571, and TERMINATOR 3: RISE OF THE MACHINES. Its screenplay comes courtesy of Michael Ferris and John Brancato, who’ve previously dealt with technology gone amok by writing both post-Cameron TERMINATOR sequels. The inspiration was a Top Shelf comic book series of the same name by writer Robert Venditti and artist Brett Weldele.

The makeup department does a fabulous job of making the actors look just plastic enough to make us believe we’re looking at androids. Radha Mitchell in particular is fabulous in this regard, giving her Surrogate a distinctive style of physical movement and facial expression that’s just slightly askew from what it should be. (In fact, if the makeup department has one failing, it’s their inability to keep Mitchell’s radiant natural beauty from shining through her character’s “real” self’s homely exterior.)

While Mitchell steals scenes as her Surrogate, Willis rises to the occasion when Tom re-enters society without the help of his own, which looks like a 50-going-on-30 version of himself with a hilariously bad blonde haircut. Willis is one of those guys who will look like an action star no matter how old he gets, and it’s refreshing to see him as a more recognizable version of himself in the film’s second half. Tom soon rediscovers the frailties of human skin, but Willis especially excels in playing the overwhelming sensory overload Tom deals with during his first steps outside in far too long a time. 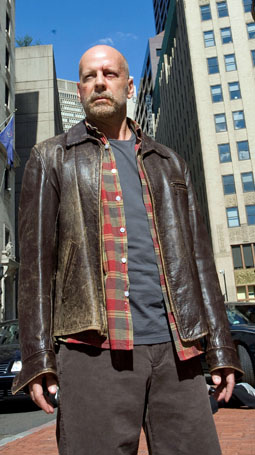 Even the cities look unusually clean, which makes sense. After all, why would Surrogates need to litter or make messes? Coupled with the film’s impressive, deceptively subtle makeup effects, these intentionally sterile backgrounds go a long way toward making the world of the film feel appropriately unreal. Cinematographer Oliver Wood (U-571 and the BOURNE films, among many others) and Production Designer Jeff Mann (T3, TRANSFORMERS) do an excellent job of proving how effective a movie’s appearance can be with just a few inspired (and intelligently applied) visual choices.

The film boasts a surprisingly high degree of action, particularly in two big sequences in which Mostow demonstrates just how frighteningly capable a Surrogate can be in the hands of a capable operator. Some of the chases and brawls in T3 were compromised by subpar digital effects, but that’s not a problem here. The smash-ups in a third-act car chase are brutally and effectively staged, and the parts played by Surrogates in these scenes mix digital elements with old-fashioned techniques that create an impact you can actually feel. But the best sequence is still probably the mid-film chase during which Tom’s Surrogate is destroyed during the pursuit of a suspect through an all-too-hostile pro-human reservation.

A few of the twists in Surrogates are predictable, but their execution is anything but. The ending itself arrives with unexpected narrative and philosophical weight and is all the more effective for it. Clocking in at just 89 minutes (with only 84 minutes of actual movie, the film’s pace is generally solid and moves well thanks to a good deal of mystery and social commentary that’s interesting without being preachy.

Definitely one of my (most unexpectedly) favorite films of 2009.