I’m sorry for so many delays between posts here, but I promise I’m writing more than I’ve ever written in my life. I’m just writing it other places.

I’m busier than ever with Impact, and my co-writer Kevin Rice and I are working hard on our Hercules movie with Alexander Nevsky, and there might be some other things I can’t tell you about yet.

But I do have some new reviews as part of my monthly gig for Bill Ramey, the hardest-working Batman fan on the planet who runs the superb Batman on Film.

I’ll no longer be reviewing Batman Confidential for the site; future reviews will be done by the massively talented Paul Casey, who’s a better writer than I am anyway.

I’ll be moving over to the new titles Streets of Gotham and Gotham City Sirens while continuing to review Detective Comics, which introduced Batman in May of 1939.

Here’s the first round: 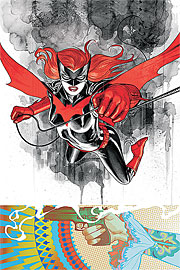 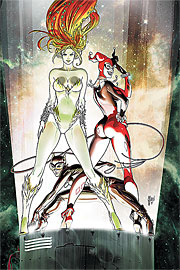 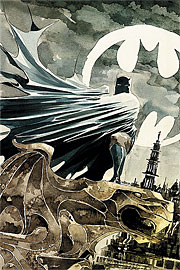 As good as these issues are, the gimmick behind them is 47 kinds of ridiculous; even though the latest Batman movie made a billion dollars, the rocket scientists running DC have lost their marbles when it comes to his comics. Bruce Wayne has been transported to the distant past of another dimension or reality or whatever, where he’s sitting around in his Batman pants drawing bats on cave walls.

And until he “returns” in what’s sure to be a similarly ridiculously fashion that will require buying a stupid number of expensive crossover issues and stunt one-shots to get the whole story, original Robin Dick Grayson has taken over as Batman and the new Robin is Damian Wayne, Bruce Wayne’s genetically engineered “son” with Talia Al Ghul, daughter of Ra’s Al Ghul.

It’s ridiculous, but this is the hand we’ve been dealt. The Detective Comics creative team of writer Paul Dini and artist Dustin Nguyen was shuffled off of Detective and placed on Streets of Gotham, which focuses less on the internal struggles of Dick’s Batman (which are being chronicled in the pages Batman and Robin and Batman) and more on the new Caped Crusader’s dealings with Jim Gordon, the Gotham City Police Department, and the various mobsters and villains always scheming to claim a bigger piece of the Gotham pie. And yet Dini and Nguyen are making gourmet omelets with the broken eggs they’ve been given. Check out the review for more details.

Sirens focuses on Gotham’s bad girls (kind of) trying to go good, and Detective will now showcase Batwoman. As my review will tell you, issue 854 is one of the most beautiful and exciting books I’ve ever read.

(As for previous Robin Tim Drake, you can track his adventures across the globe to prove Bruce Wayne is still alive in the pages of yet another new title, Red Robin.)

Thanks as always for reading. More to come soon!