So the Tuesday Night Dinner Gang of me, the Nevilles (Courtney, Bob, and Oliver), and the Carsons (Melissa and Mike) has gotten hooked on this hilarious obstacle course/game show on ABC called Wipeout.

You should go right here, right now, and watch “Week 6.”

I promise you’ll laugh so hard it will hurt. If possible, watch it with several friends who also like to laugh.

Anyway, last night’s episode was a clip show — of a game show! — where they gave out awards, and one of the contestants they showed said, and I quote, “I’m laid back at lunch time, aggressive at crunch time, let’s GET THIS!”

(Shortly after saying that, he bounced between two giant rubber balls so hard it made him do the splits against one of them in what’s probably the single greatest ball-busting ever captured in the course of televised human history.)

I said, “I’m going to make that my MySpace headline.”

Courtney said, “Only if you can accompany it with a picture of you getting hit in the balls with a ball.”

So we all went outside and did this: 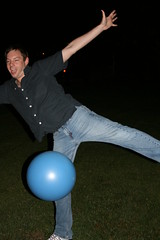 And kids, please don’t try this at home.

Last Thursday night, Courtney and Bob and Melissa and I drove up to Indianapolis to meet Karen and Todd for an amazing evening of music courtesy of our good friend, Garrison Starr.

Garrison has a voice and a style unlike anybody else, and her lyrics will leave you suspecting she knows you better than you know yourself.

Check out her official site and her MySpace and listen to some songs and buy some records and support good music.

Bob took plenty of amazing photos that you can see right here: 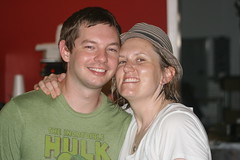