Some of my best memories about movies come from all the times my parents let me stay up and watch James Bond movies on ABC. This was the Roger Moore era, of course, and sometimes they were silly, but I loved them anyway. Pretty girls! Gadgets! A car that drove underwater! Little boys love those kinds of things, even when they’re less than a week away from turning 35.

Though more than one Connery fan has given me hell for saying it, my favorite Bond actor is the current guy — Daniel Craig. He’s a master of suave, British cool, but he also exudes a rugged, old-school Hollywood tough guy vibe. (For example, he reminds me a lot of Steve McQueen.)

What really sets Craig apart from the others, however, is how truly dangerous his Bond is. This guy will kill you first and kill you the worst, all without losing a moment’s sleep about it.

Casino Royale was excellent (review here), and I liked Quantum of Solace even better. It’s the leanest and meanest of all the Bond movies, and it tragically, defiantly, and rather beautifully sets up the character to become a 007 more capable and lethal than any of the ones so many of us grew up with.

So why have nearly two years passed since Quantum of Solace without a new Bond film in production or even scheduled to be?

Sam Mendes has long been linked to direct the next one, and Daniel Craig is more than ready. But the money woes of MGM Studios have thrown wrench after financially challenged wrench into everyone else’s creative gears. 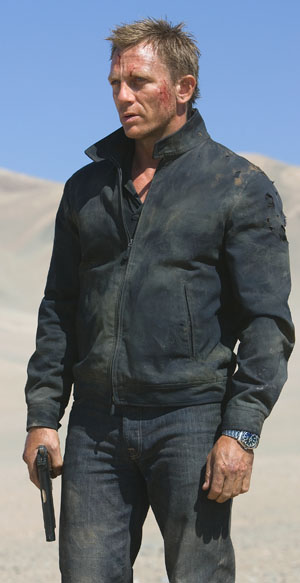 And that’s a shame, because we’ve got the best Bond we’ve ever had, and we’re wasting him.

But maybe there’s light at the end of the tunnel. Back in August, the Wall Street Journal reported that Spyglass Entertainment could possibly come to the rescue, and now that MGM has filed for bankruptcy, the Bond producers are already looking to the future — IGN just spoke to Eon Productions’ David G. Wilson, who notes that Mendes is still involved and production could begin next year.

That’s certainly much better news than what the producers were saying in April, when MGM’s seemingly insurmountable incompetencies forced them to declare the franchise “indefinitely” on hold.

(For an archive of all of IGN’s excellent Bond coverage, click here.)

It breaks my heart to see money issues always getting in the way of the good stories I’m so eager to be told, but it’s an unfortunate aspect of the business.

Regardless of who ends up writing the checks, I hope we get some solid news on the next installment soon.

In the meantime, the greedy bean counters at MGM who caused this mess are welcome to go drown in a quantum of sorry.