Watch and download the teaser trailer for The Dark Knight right HERE!

There’s no actual footage from the movie. It’s all voices. It begins with the Batman emblem slowly coming apart with light pouring in from behind it. And at the end, right before it evaporates completely, you can briefly see the image of a Joker card.

Here’s the dialogue that plays over the logo:

Bruce Wayne (Christian Bale) says, “I knew the mob wouldn’t go down without a fight. But this is different. They’ve crossed the line.”

“You crossed the line first, sir,” replies his trusted butler, Alfred Pennyworth (Michael Caine). “You hammered them, and in their desperation they turned to a man they didn’t fully understand. Some men aren’t looking for anything logical. They can’t be bought, bullied, reasoned or negotiated with. Some men just want to watch the world burn.”

And then The Joker (Heath Ledger) says, “Starting tonight, people will die. I’m a man of my word.” And then he starts laughing and it’s terrifying. 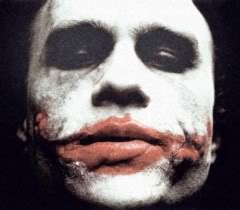 Part of me is disappointed that there’s not more to it, but the rest of me is glad that director Christopher Nolan is keeping things under wraps for as long as possible. Batman Begins had some awesome surprises and I’m sure The Dark Knight will up the ante quite nicely.

Remember the whole See You in December thing on The Joker’s website? Maybe that means the first actual trailer with Joker footage will appear in December.

The Joker won’t think it’s funny when The Dark Knight punches him through the wall of the theater near you on July 18, 2008!